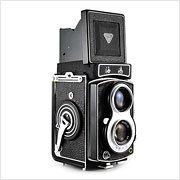 Seagull is a Chinese brand used by several camera factories in and around the city of Shanghai. Seagull is China’s oldest and largest camera brand, having reportedly manufactured over 21 million cameras since its founding in 1958.

The origins of Seagull can be traced back to a number of Chinese camera factories unimaginatively named “Shanghai Camera Factory” followed by “Number 1,” “Number 2,” and so on. Their first camera was the Shanghai 58-I which was a direct copy of the Leica IIIb and a commercial failure due to shutter defects and high production costs. The company began manufacturing a successful series of twin lens reflex cameras based on the Rolleiflex in 1959 but they wouldn’t be officially branded “Seagull” until they began exporting cameras for sale abroad in 1964.

In 1978, several of the factories relocated a bit further away from central Shanghai and formed the Shanghai General Camera Factory in Songjiang County (now the Shanghai suburb of Songjiang). They manufactured copies of Minolta cameras due to their relatively simple construction as medium format cameras began to fall out of fashion in favor of smaller 35mm models. As digital photography began overtaking film, Seagull entered into a partnership with Eastman Kodak to produce Kodak-designed digital cameras. Today, Seagull produces large format folding cameras as well as lenses and other photographic accessories like film, studio lighting equipment, tripods, and filters.

Interested in starting or growing your own collection of Seagull cameras?
Check eBay to see what’s available.
References: