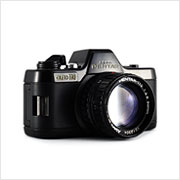 In the early years as Asahi Kogaku Kogyo G.K., Pentax produced eyeglass lenses before manufacturing lenses for cinema cameras in the early ’20s and then still camera lenses for companies like Konishiroku (Konica) and Chiyoda (Minolta) starting in the early 1930s. In 1938, the company officially changed its name to Asahi Kogaku Kogyo K.K. or Asahi Optical Co., a moniker it would use until the beginning of the 21st century.

During World War II, Pentax produced optical instruments including binoculars, range finders, and aerial reconnaissance cameras for the Imperial Japanese military. After the war in 1952, the company produced the very first 35mm SLR from Japan, the Asahiflex I. Two years later, the Asahiflex II debuted the very first instant return mirror system which soon became a standard for SLRs worldwide.

In 1957, the company began officially producing cameras under the Pentax name and set up a partnership with the Minneapolis-based Honeywell Corporation in order to sell cameras in the United States. Many of these cameras were rebranded under the Honeywell Pentax name but are otherwise identical to the original models. In addition to consumer-grade 35mm cameras, Pentax also expanded into professional-grade medium format cameras in 1969 with the mighty Pentax 6×7, a camera that still has a large cult following today. Another model that remains extremely popular is the venerable Pentax K1000 which continues to be the camera of choice for many beginner photographers worldwide.

Shortly after it became officially known as Pentax Corporation, Pentax merged with the Japanese optical company Hoya Corporation in 2008 and remained with them until 2011 when Hoya sold the company to electronics company (and former camera manufacturer) Ricoh. The name was changed to Pentax Ricoh Imaging Company, Ltd. and then the Pentax name was dropped entirely when the name changed again to Ricoh Imaging Company Ltd. in 2013. Despite the name change, Ricoh continues to develop and sell Pentax-branded cameras.

Interested in starting or growing your own collection of Pentax cameras?
Check eBay to see what’s available.
References: