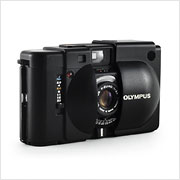 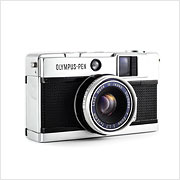 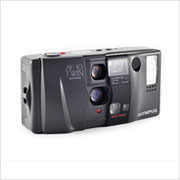 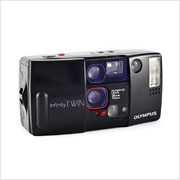 Olympus is a Tokyo-based Japanese camera company founded by Takeshi Yamashita in 1919 as Takachiho Seisakusho. The company was originally named after Mount Takachiho whose peak is the mythological dwelling place of Shinto deities, a sentiment later echoed when it renamed itself after the home of the Greek gods in 1949. Originally established for the manufacture of microscopes, Olympus is now an enormous multinational corporation worth billions of US dollars and a major optics manufacturer.

In the early 20th century, the vast majority of optics were imported from abroad so Mr. Yamashita founded the company so that Japan could produce microscopes domestically without having to rely on foreign companies. Within just six months, Takachiho Seisakusho produced its first microscope. By 1922, the company registered the name ‘Olympus’ for use on its products and by 1933, it became an official microscope supplier to the Japanese Imperial Navy. The company soon began expanding into camera lenses and eventually began manufacturing entire cameras by the late ’30s.

Unlike many other camera companies such as Graflex, Nikon, and Balda who produced military hardware for their countries during World War II, Olympus continued to produce consumer cameras and microscopes until Allied bombing campaigns destroyed one of their primary factories. The company officially changed its name to Olympus Kogaku Kogyo K.K. in 1949 and soon released the world’s first practical endoscope camera as proof of its prowess in both medical and photographic fields.

While never quite at the forefront in terms of technology, Olympus focused on size, producing many groundbreaking products like the Pen series of compact 35mm half-frame cameras and the XA: the smallest full frame 35mm rangefinder camera ever produced. As digital SLRs became more and more popular, Olympus again lost ground to its competitors, causing it to create the Four Thirds standard for its SLRs and, later, the Micro Four-Thirds standard as it pioneered the mirrorless interchangeable lens camera market. In addition to digital cameras, Olympus also produces binoculars, audio recording devices, microscopes, and other medical and industrial optics.

Interested in starting or growing your own collection of Olympus cameras?
Check eBay to see what’s available.
References: