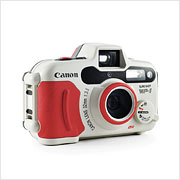 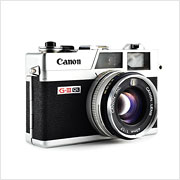 Canon is an Japanese brand founded in 1933 as Seiki Kogaku Kenkyujo (Precision Optical Instruments Laboratory) in Tokyo by Goro Yoshida, his brother-in-law Saburo Uchida, Uchida’s colleague Takeo Maeda, and Uchida’s close friend Takeshi Mitarai. Over the decades, Canon has grown to become an enormous multinational company producing a wide variety of imaging products such as photocopiers, scanners, and, of course, cameras.

The story goes that Goro Yoshida was interested in the possibility of making high end 35mm rangefinders in Japan and so established a company to further investigate the matter. After closely studying a disassembled Leica II, Yoshida became angry when he realized that the premiumly priced German camera was made of high quality but relatively inexpensive parts. He went to work replicating the Leica II and produced the company’s first camera in 1934: the Kwanon which was named after the bodhisattva Guanyin, the Buddhist Goddess of Mercy. Two years later, the company eased up on the religious iconography, registered the “Canon” trademark, and released its first commercially available camera: the Hansa Canon which used a Nikon-sourced lens since they didn’t start making their own optics until just before World War II.

Precision Optical Industry, Co., Ltd. emerged from World War II virtually unscathed and resumed operations with the goal to surpass Leica. Luckily for them, there was a growing interest in Japanese-made cameras among Allied (mainly American) soldiers occupying postwar Japan but the Precision Optical Industry Co.’s disjointed naming conventions began to hurt sales so they decided to unify all products and rename the company as Canon Camera Co.

As Nikon began dominating the professional market in the late ’50s and early ’60s with the venerable F and its successors, Canon slowly distanced itself from the high-end market and began manufacturing lower-end models for consumers and even entered into a partnership with Bell & Howell to market Canon models in the United States. With cameras like the ever-ubiquitous AE-1 and the wildly popular Canonet QL17 G-III, Canon gained control over a significant portion of the consumer camera market before striking back at Nikon in 1989 with the professional-grade EOS-1 and a brand new line of autofocus lenses which lured countless photographers away.

Today, Canon is a leader in the camera industry having claimed the number one spot in global Digital SLR sales since 2003. In addition to digital cameras, Canon also offers a wide variety of other products such as consumer and professional grade camcorders, flatbed scanners, fax machines, photocopiers, printers, ophthalmic diagnostic equipment, and digital X-ray machines.

Interested in starting or growing your own collection of Canon cameras?
Check eBay to see what’s available.
References: