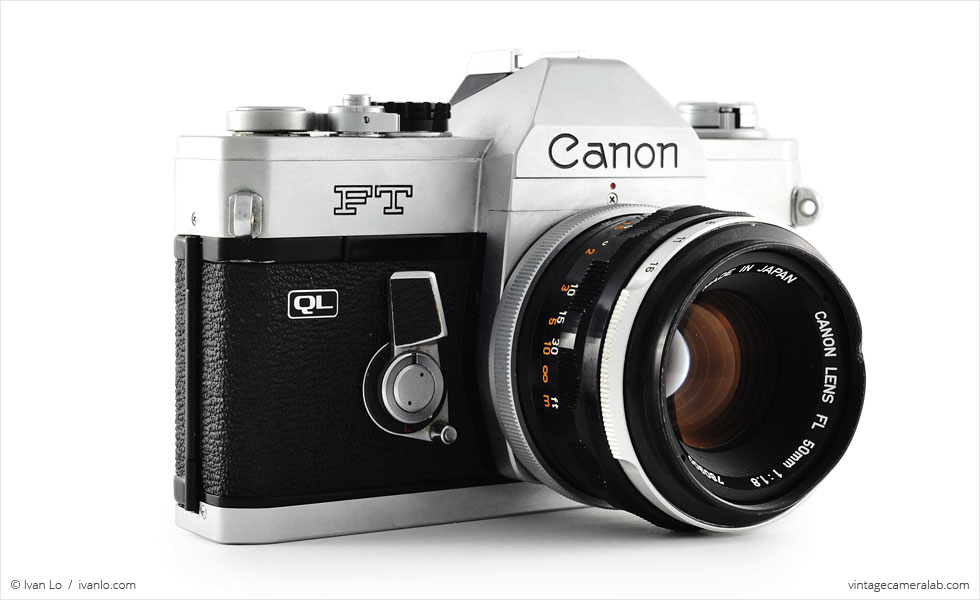 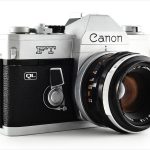 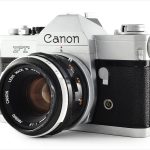 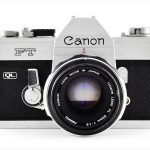 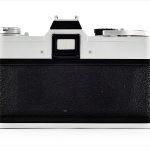 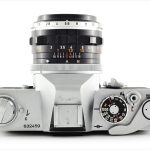 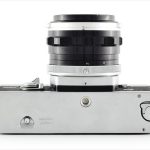 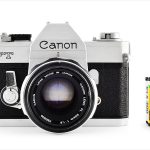 The Canon FT QL is a manual, mechanical single lens reflex camera introduced by Canon in 1966 and is also the first Canon camera to feature TTL (through the lens) metering. The FT QL belongs to the family of SLRs that were designed around Canon’s short-lived FL breech-lock lens mount which lasted from 1964 until the the FD Mount was introduced in 1970. The FT is very similar to its two older brothers: the FX and the FP with the only real difference being the FX’s lack of TTL metering and the FP’s complete lack of integrated light meter. Also included in this family is the unusual Canon Pellix, the first of only a handful of cameras in history to use a fixed translucent pellicle mirror until the concept was resurrected by Sony in 2010 with its Alpha SLT series. The “QL” designation introduced by the Canon FT QL stands for “Quick Load” which denotes the inclusion of a spring-loaded hinge that assists in the loading of 35mm film. This quick loading system can also be found on other Canon models such as the Canonet QL17 G-III.

Followed only by the slower and simplified Canon TL, the FT is arguably the flagship model of the entire FL-Mount family and is packed with features. Perhaps the most noticeable fixture on the front apart from the lens is the beautiful multipurpose lever located under the “FT” badge. When pushed towards the lens, the lever functions as a depth of field preview button which can then be locked into place by sliding the switch at its base to the “L” position (note that depth of field preview can also be activated on the lens itself rotating the first ring after the mount lock from “A” to “M”). When pushed in the other direction, the lever becomes a self-timer. On the other side of the lens mount is a mirror lock-up switch and a flash sync socket underneath.

On the user’s left-hand side of the camera is circular compartment for the battery which powers the FT’s metering system. Adjacent to it on the top plate is the film rewind knob with a “check battery” switch at its base. On the other side of the cold shoe above the viewfinder is a dial that sets both film speed (ISO 25 to 1600) and shutter speed (1-1/1000 seconds, Bulb, and X: a flash sync speed of 1/60). Next to the dial is the shutter button with threaded socket for a cable release and a shutter lock switch at its base. On the very right of the top plate is the film advance lever with a frame counter above it. On the bottom plate is the film rewind release button, a standard tripod socket, and the release switch for the film door.

This Canon FT QL was given to me while I was attending university by a family friend who purchased it brand new as a young man. Having been kept in its bespoke leather case for most of its life, the camera is in very good cosmetic condition with only a few odd marks on the body and is in perfect working order. However, The Canon FL 50mm f/1.8 lens included with the camera bears a telltale dent on the filter ring which indicates that it (or the entire setup) was most likely dropped at some point.

Want one for yourself?
Find your very own Canon FT QL on eBay.
References: 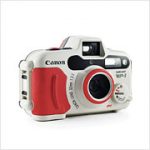 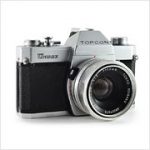 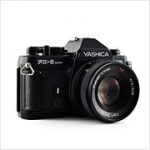