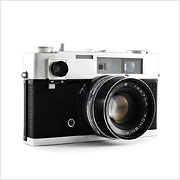 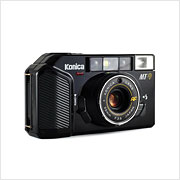 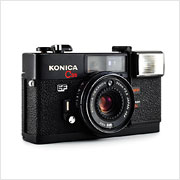 Konica is a Japanese company founded in 1873 when pharmacist Rokusaburo Sugiura began selling photographic products at his shop in Tokyo. As the very first Japanese camera company, Konica pioneered photographic technology in Japan at a time when such products were almost exclusively imported thus solidifying its status as one of the most important Japanese companies ever.

In 1903, Konica (then known as Konishi Honten) debuted the Cherry Hand Camera: a simple box camera based on European models and the very first Japanese camera to carry a brand name. Shortly after renaming itself G.K. Konishiroku Honten, the company founded the Konishi Professional School of Photography (now known as Tokyo Polytechnic University) in 1923. Two years later in 1925, Konishiroku released a folding camera called the Pearlette—the very first mass produced Japanese camera—which they continued to produce until the late 1940s.

In 1947, Konishiroku released a 35mm rangefinder called the Konica: a portmanteau of “Konishiroku” and the English word “camera” which would later become the name of the company itself. Other significant cameras in Konica’s history include 1963’s Konica Auto S: the very first automatic exposure 35mm camera with a cadmium sulfide meter, the Autoreflex of 1965: the very first focal plane shutter 35mm SLR to feature an auto exposure system, the C35 EF from 1975 which was the world’s first compact 35mm camera to feature a built-in flash, 1977’s C35AF which was the first autofocus 35mm compact camera, and the FS-1: the first 35mm SLR to have a built-in motor drive which debuted in 1978.

Konishiroku finally renamed itself Konica Corporation in 1987. In 2003, Konica merged with Minolta to form Konica Minolta and continued to make cameras until 2006 when financial problems forced it to sell its camera division to Sony and exit the market. Today, Konica Minolta continues to make a wide range of products including industrial and commercial grade printers, industrial optics, planetarium projectors, and various medical devices.

Interested in starting or growing your own collection of Konica cameras?
Check eBay to see what’s available.
References: