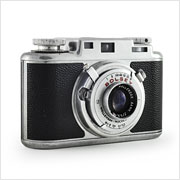 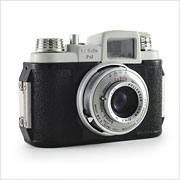 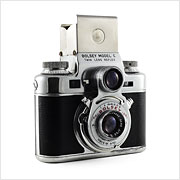 Bolsey is an American brand founded in 1947 in New York City by Kiev-born engineer Yakob Bogopolsky, better known today as Jacques Bolsey. While living in Switzerland in 1923, Bolsey designed his first 35mm camera: the Cinegraph Bol which could be used for both still photography and movies. Four years later, Bolsey effectively democratized cinema by inventing the famous Bolex series of movie cameras before selling the company and rights to produce Bolex cameras to Paillard in 1930. Bolsey was later hired by the high end Swiss camera company Alpa in the late ’30s to design cameras before immigrating to the United States at the start of World War II.

Upon his arrival in America, Jacques Bolsey began working with the United States government to design various cameras for the military including those used for aerial combat photography. One of his still camera designs from World War II became the basis of the Model B, the very first camera produced by the Bolsey Corporation of America when it was founded after the war in 1947. Coming full circle, variants of the Bolsey Model B were manufactured specifically for the United States military for use by both the Air Force and the Army Signal Corps. Bolsey continued to produce 35mm cameras with the many variations of the Model B evolving into the Model C: the only 35mm TLR rangefinder ever made. Bolsey also sold a medium format pseudo-TLR box camera as well a compact 8mm movie camera that could also take stills.

Suffering from poor sales due to economic factors and foreign competition, Jacques sold Bolsey to the Wittnauer watch company in 1956 which kept him on board while continuing to sell Bolsey-branded cameras. Jacques Bolsey died suddenly in January 1962 and the Bolsey Corporation of America faded away soon afterward.

Interested in starting or growing your own collection of Bolsey cameras?
Check eBay to see what’s available.
References: