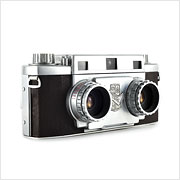 Revere was an American brand originally founded in Chicago by Ukrainian immigrant Samuel Briskin as the Excel Radiator Company in 1920. Although Revere sold a series of still cameras, it is perhaps best remembered for its lineup of 16mm and 8mm movie cameras.

The company was originally founded to produce automotive radiators but began branching out into other markets by the 1930s. In 1939, the company began producing consumer-grade 8mm movie cameras. Shortly afterward, the Excel Radiator Co. was rechristened as the Revere Camera Co. in honor of the Revere Copper Co. which provided financial assistance to the company during the Great Depression. By the 1950s, Revere had become a major player in the American movie camera industry and purchased its biggest supplier of lenses and shutter assemblies: the well-established Wollensak Optical Co. from New Jersey.

In 1953, Revere produced its first still camera: the 35mm Stereo 33. Shortly after the launch of the Stereo 33, Revere upgraded it with better lenses and shutters, inflated the price, and sold it as the Wollensak Stereo Model 10. Wollensak made one last still camera in 1958: the Revere Eye-Matic EE 127, a rugged rangefinder designed for 127 film. A couple of years later in 1960, Briskin was diagnosed with terminal cancer and so decided to sell his company to 3M.

Now in the hands of 3M, Revere again sold still cameras. Only now, they were cheap, plastic 126 format cameras manufactured under license by Minolta. 3M phased out the Revere brand not long after that.

Interested in starting or growing your own collection of Revere cameras?
Check eBay to see what’s available.
References: