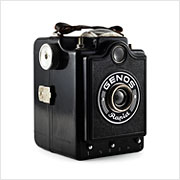 Genos Kamerabau was an obscure German brand founded sometime in the early 1930s as Norisan Apparatebau in Nuremberg, Germany. Genos had a lineup of box cameras made almost exclusively from Bakelite (an early plastic) with a production run spanning from 1935 until the mid 1950s.

Not much is known about the company or why its name changed from Norisan to Genos after World War II. What we do know, however, is that they produced simple plastic box cameras like the Rapid for about 20 years. Most of them had simple, no frills lenses and single speed shutters, and utilized mainly medium format films with a few 35mm cameras along the way.

Genos Kamerabau disappeared from the industry circa 1956 after having produced over a dozen different camera models.

Interested in starting or growing your own collection of Genos cameras?
Check eBay to see what’s available.
References: