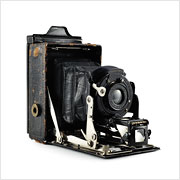 Ernemann was a German brand founded in 1889 by Heinrich Ernemann and a partner as Dresdner Photographische Apparate-Fabrik Ernemann & Matthias in Dresden, Germany. With models like the Ermanox and the Heag series during its relatively brief but productive 37 year life as an independent company, Ernemann consistently designed and manufactured what many (including myself) consider to be among the most interesting, innovative, and unusual cameras ever made.

Heinrich Ernemann was originally in the textiles and clothing industry but after teaching himself about photography, he decided to try cameras. Ernemann’s first models were, apart from their wooden bodies, basically just assembled using parts manufactured by other companies. Dresden’s photographic industry picked up steam and soon became oversaturated, causing many companies to flounder. Ernemann weathered the storm by transforming into a publicly traded company in 1899, reestablishing itself as Heinrich Ernemann, Aktiengesellschaft für Cameraproduktion in the process. In the years that followed, Ernemann reached beyond Dresden, taking over Herbst & Firl, a camera firm based in the border town of Görlitz, and began producing cameras as well as projectors in both cities.

Ernemann continued to expand camera production with a successful foray into cinema cameras and even began making their own lenses in 1908. When the First World War started in 1914, Ernemann began manufacturing military optics as well as personal cameras for the Kaiser’s soldiers. Shortly after World War I, a new factory was built in Dresden which featured the famous Ernemann Tower, a landmark that has since found its way onto Pentacon‘s logo. However, the ensuing financial meltdown caused by the Treaty of Versailles eventually forced Ernemann to merge with local rival ICA, Stuttgart’s Contessa-Nettel, and Berlin’s Goerz to become Zeiss Ikon in 1926. Shortly after World War II, Zeiss Ikon split into east and west along with Germany and those parts continue today as Pentacon GmbH and Carl Zeiss AG.

Interested in starting or growing your own collection of Ernemann cameras?
Check eBay to see what’s available.
References: