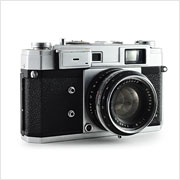 Beauty was a Japanese brand that was founded circa 1946 as Taiyodo, a camera distributor in Tokyo, Japan. In 1948, the company branched out into camera manufacturing and established itself as Taiyodo Koki K.K.. The company started off making subminiatures but soon began producing a series of twin lens reflex cameras, folding cameras, and medium format SLRs before expanding into fixed lens rangefinders like the Super L during the mid ’50s.

The company went bankrupt and emerged restructured as Beauty Camera K.K. in 1957 and continued camera production until the early 1960s. Sometime after 1963, the company went under and faded from existence. Not much is known about the circumstances surrounding its failure but given its declaration of bankruptcy just a few years earlier, it’s probably safe to say that it wasn’t entirely surprising.

Interested in starting or growing your own collection of Beauty cameras?
Check eBay to see what’s available.
References: