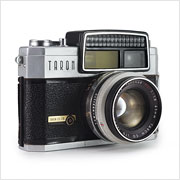 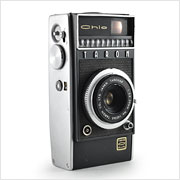 Taron was a Japanese camera brand founded as Nippon Kosokki Seisakusho in the Omori district of Tokyo circa 1940. In the early years, the company manufactured shutter assemblies under the NKS brand name. These shutters were used by a long list of cameras including those manufactured by Mamiya, Fujica (now Fujifilm), Topcon, as well as Toyoca and, once the company began producing its own cameras in the early 1940s, Taron itself.

In 1960, the company officially changed its name to Taron Co., Ltd. The vast majority of cameras produced by Taron have been conventional 35mm fixed-lens rangefinders with only a few exceptions like the early Taroflex twin lens reflex camera and the eccentric vertically-oriented Chic.

Taron ceased camera production sometime in the late 1960s for reasons unknown and the entire company appears to have faded out of existence shortly after.

Interested in starting or growing your own collection of Taron cameras?
Check eBay to see what’s available.
References: