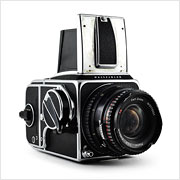 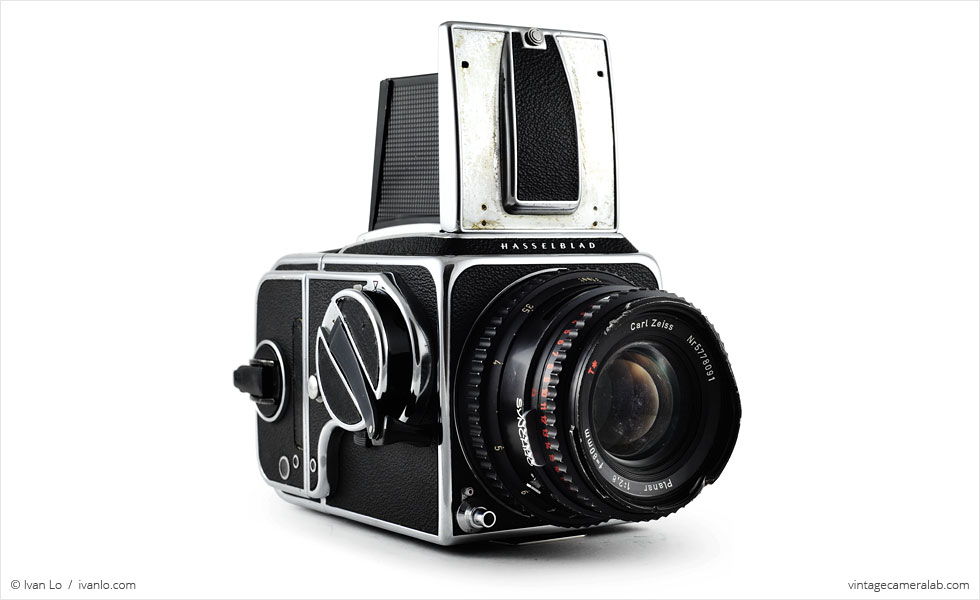 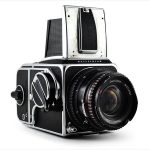 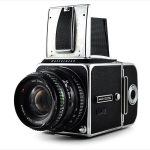 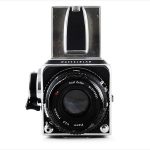 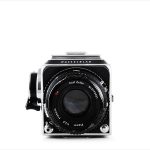 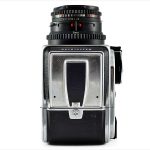 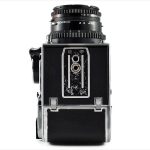 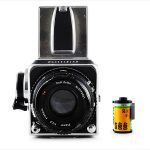 The Hasselblad 500 C/M is a medium format single lens reflex camera introduced in 1970 by Victor Hasselblad AB in Göteborg, Sweden. This model is one of the later models in Hasselblad’s V-System, a wildly popular camera system that boasts a wide variety of modular parts like viewfinders, film backs, cranks, and, of course, lenses. The 500 C/M is based on the original 500 C from the late 1950s: the first of many modified Hasselblad cameras to be taken into space by NASA astronauts.

One of the major evolutions of the V-System was the use of lens-integrated shutters instead of focal plane shutters in the body. With legendary lens company Carl Zeiss and renowned shutter manufacturer F. Deckel backing the decision, Hasselblad’s new direction meant that the camera itself could be simpler and more reliable. The first camera to reflect this change was the 500 C, so named because the maximum shutter speed is 1/500th of a second. The 500 C/M is nearly identical to the 500 C, the only major difference being new mounting points (two clips versus four screws) for the viewfinder module that make it easier to swap.

Most of the controls on the Hasselblad 500 C/M are on the lens itself like focus, shutter speed, and aperture as well as a flash sync socket. Situated by the lens mount on the body itself are a threaded shutter button in one corner and a rounded lens mount release button on the other. The film advance is on the user’s right hand side and there are two tripod sockets on the bottom for both 3/8″ and 1/4″ standards. One of the main things that really impresses me about the Hasselblad is the interconnectivity between the modules. For example, the film back comes with a metal dark slide to protect the film when the back is off. Having the dark slide in place locks the shutter, preventing you from taking useless exposures and when the dark slide is removed, it locks the back to the camera so you can’t accidentally take it off and ruin your film.

My 500 C/M has a pretty classic setup: a standard A12 back for 120 film, an early model rapid winding crank, a waist level finder, and a Carl Zeiss Planar 80mm f/2.8 lens. Unlike the other cameras in my collection, I didn’t buy this through an eBay auction, snatch it up at a flea market, or rescue it from a thrift store. My buddy Tim actually found this camera in an abandoned Bay Area house that he was clearing out with his brother-in-law. That said, this 500 C/M has seen better days. The biggest problem is that the lens is busted. Pretty much everything except the aperture ring is frozen stuff, probably an alignment issue from being dropped or, as the gouges suggest, an axe murderer. The waist level finder has issues staying closed but the body itself is in good condition with everything working as it should. The film back appears to be in good working order apart from there being a roll of film stuck inside.

It might be a while before I can get this thing working again but it’s definitely something I plan on doing.

Want one for yourself?
Find your very own Hasselblad 500 C/M on eBay.
References: