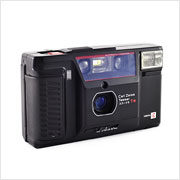 Kyocera is a Japanese company founded in 1959 in the city of Kyoto. Although better known for its mobile phones and ceramic goods than for its cameras, Kyocera’s brief foray into the world of photography produced some of the finest compact 35mm cameras ever made.

Originally founded as the Kyoto Ceramic Co., Ltd., the company produced ceramic goods like insulators for television sets and other electronics. Later on in the 1970s, the product line was expanded to include solar cells, synthetic gemstones, and industrial cutting tools. After buying out various electronic companies, the company renamed itself the Kyocera Corporation and began producing electronics like laptop computers, CD players, and turntables.

Interested in starting or growing your own collection of Kyocera cameras?
Check eBay to see what’s available.
References: